Australian researchers recently reported a sharp decline in the abundance of coral along the Great Barrier Reef. Scientists are seeing similar declines in coral colonies throughout the world, including reefs off Hawaii, the Florida Keys and in the Indo-Pacific region.

The widespread decline is fueled in part by climate-driven heat waves that are warming the world’s oceans and leading to what’s known as coral bleaching, the breakdown of the mutually beneficial relationship between corals and resident algae. 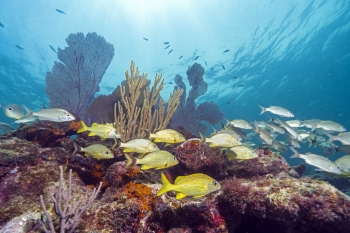 Coral reef in the Florida Keys. Photo by Tom Shlesinger

But other factors are contributing to the decline of coral reefs as well, including pollution and overfishing.

“We found a strong signal that local conditions influenced outcomes for corals after heat-stress events,” said Mary Donovan, lead author of the study and assistant professor in the School of Geographical Sciences and Urban Planning at Arizona State University.

The importance of local conditions to reef survival is often dismissed, making those who rely on coral reefs for their livelihood or those who are stewards of the reefs feel hopeless. Yet, coral reefs are profoundly important.

“Coral reefs are important on a fundamental level for biodiversity,” said Donovan, who is also a member of ASU’s Center for Global Discovery and Conservation Science.

Two local issues that can have a large effect on the health of coral reefs are nutrient pollution and overfishing. Overfishing depletes the number of fish that eat algae and keep the reef’s ecosystem in balance. For example, depleting the number of herbivorous fish can lead to an overabundance of macroalgae, which can indicate a stressed ecosystem.

However, both overfishing and pollution offer opportunities for management strategies that could boost coral reefs’ resistance to climate change.

Study data were collected worldwide by professional scientists as well as trained and certified community-scientists on behalf of Reef Check. Only data collected during and within one year after a climate-driven bleaching event were analyzed to determine the health of the reef. Donovan is now applying this research to local efforts to address conditions that harm reefs.

“Coral reefs take up some of the smallest area on our planet but harbor the most species of any ecosystem on Earth, and they’re also incredibly important to people. People all over the world rely on reefs for food security, for coastal protection from storms and for other livelihoods. In many parts of the world, it isn’t only a question of beauty, but a question of survival,” Donovan said.

The research was funded by the National Science Foundation and a grant from the Zegar Family Foundation.